The Green Hills of Earth 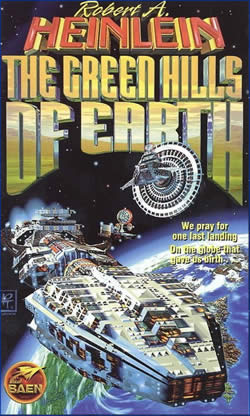 Reviewer: Daniel Jolley
Robert Heinlein was writing great science fiction before a lot of people even knew what it was. The Green Hills of Earth features ten early short stories from the 1940s; all of these stories are set in outer space, but these are more sociological and entertaining than technical in the way of hard science fiction. In "Delilah and the Space Rigger," the head of the space station construction project is horrified to discover that his new engineer is a woman. His fear of having one woman working among a crew of 200 men is never alleviated, but the modern-day Delilah makes good use of her undeniable engineering skills to win a victory of sorts in the end. "Space Jockey" is basically a story of a space pilot and his stay-at-home wife. It basically explores the issues of a traditional marriage in which the husband is away from home more than either partner would like for him to be. These two stories' treatment of women is far from sexist in my opinion. "The Long Watch" and "Gentlemen, Be Seated" are stories of bravery and heroism. In the first, a spaceman risks his radiation-vulnerable life to stop a military coup from taking place, while the second describes the heroism of three men trapped in a tunnel collapse in Luna City. "The Black Pits of Luna" is a story of a normal family whose youngest son (referred to lovingly as "the brat") wanders off by himself on a tour of the moon. The search for the little guy offers us some clues as to what sorts of qualities a space man should have (as well as the qualities of individuals who should never have been allowed on the moon to start with).
"It's Great to be Back" is enjoyable yet wholly predictable. After three years on the moon, a couple absolutely yearns to go back home to earth, only to find that their idea of home has changed immensely during their sojourn in Luna City. "-We Also Walk Dogs" is probably the most singular story in this collection. General Services basically serves any request made by its customers, offering a service borne of the old tradition of walking dogs for rich folks. Their commitment to do whatever job needs to be done is put to the ultimate test when a bureaucrat asks them to make hay with the laws of gravity in order to pave the way for an ultra-important international business meeting on earth. "Ordeal in Space" is another hero story-"Mr. Saunders" is a space hero who has become deathly afraid of heights as the result of a terribly frightening yet heroic ordeal above the earth. He is so afraid of heights that he can't even look up at the sky without getting queasy. When he reluctantly accepts a dinner invitation and ends up spending the night in an apartment 35 stories above the ground, the meowing of a kitten stuck out on the ledge challenges him to overcome his fears. As an acrophobic person myself, it was all I could do to get through some of Heinlein's realistic descriptions of the heights involved in this kitten rescue mission. "The Green Hills of Earth" is the story of the unofficial poet laureate of outer space, but I found it to be the only slightly disappointing story in the book. Finally, "Logic of Empire" rounds out the collection. Humphrey Wingate gets into a heated discussion about the reality of indentured servitude on Venus, refusing to see it as a modern form of chattel slavery. When his friend asks him to put his money where his mouth is, he has the great misfortune of being very drunk. Upon awakening, he finds himself on a ship bound for Venus, where he quickly develops a brand new standpoint on the subject of Venusian servitude.
These are all great stories which the passage of time has not hurt one iota. Set in a science fiction setting, they are all essentially stories of people and their interaction with one another. Any fan of Heinlein or science fiction in general is missing a rare treat if he/she overlooks The Green Hills of Earth.