The Fourth Dimension is Death 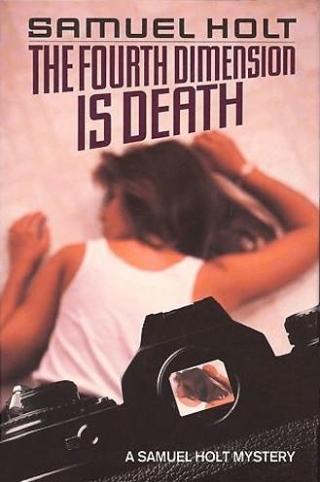 There was a body. Then there was another body... and a photograph. Then there were too many cops asking too many questions and the gossip began and got worse — gossip about how money can buy you anything, about how power meant you could destroy anybody. All Sam Holt was doing was defending himself. Nonviolently and almost against his will. But things were out of control and racing away and Sam was left with only one direction in which to turn. He may have played a private eye, but that didn’t mean he was one. But... It all began with the lawsuit: a young actor with a remarkable resemblance to Sam was portraying the character Sam had created in a series of commercials, and the people who owned the character wanted it stopped. There was to be a hearing, and that’s why Sam was at his New York town house. He didn’t want to ruin anyone’s career; after all, if Holt didn’t know the problems facing an out-of-work actor, no one did. Holt doesn’t know the problems of the dead, of course, but he does know the difficulties they can cause for him. Especially when the first body is discovered near his town house, and the second provides a clue pointing directly at him.