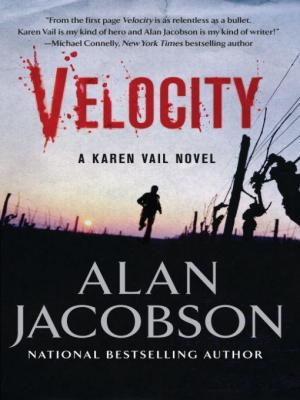 Renowned FBI profiler Karen Vail returns inVelocity, national bestselling author Alan Jacobson’s most explosive thriller to date. Detective Robby Hernandez, Vail’s boyfriend, has vanished into the dense air of a Napa Valley evening. There are no clues to his whereabouts, other than blood stain and tenuous connections to a vicious serial killer operating it the wine country.
As the task force struggles with Robby’s disappearance, the killer challenges Vail by boldly leaving his high profile victims in public places. Is this offender somehow responsible for Robby’s disappearance? Evidence suggests that he is-but just when Vail and the task force begin to make progress, the FBI orders Vail to return to Quantico to handle a case of vital importance.
Back in Washington, Vail engages convert government operative Hector DeSantos to determine what happened to Robby. It’s a move that backfires when DeSantos’s confidential informants lead them into unforeseen dangers, forcing Vail to face off against powerful foes unlike any she’s ever encountered, threatening her life, her career…all that she holds dear.
In a frantic race against time that takes them from the monuments of Washington D.C. to the wealthy beach enclaves of San Diego and the bright excesses of Las Vegas, shocking truths emerge-truths that will forever change Karen Vail.

Helter Skelter [The True Story of the Manson Murders]

Land of the Living