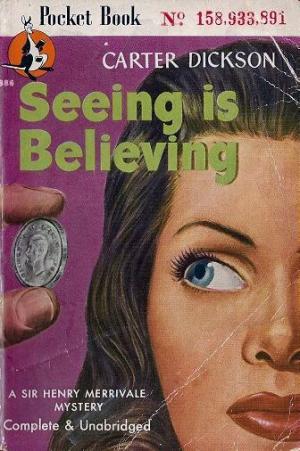 Arthur Fane arranges an unusual entertainment for his uncle, a long-term guest, and a few other witnesses — he hires Dr. Rich to hypnotise his wife Victoria. The guests, but not Victoria, have been shown that a gun in the room is actually harmless; everyone, including Victoria, is aware that a dagger provided is made of rubber. The hypnotised Victoria is invited to shoot her husband, and refuses; when told to stab him, though, she agrees. Unfortunately, someone has substituted a real dagger for the rubber one, even though everyone in the room agrees that it would have been impossible to make the substitution.
Although Sir Henry Merrivale is busily engaged in dictating his scandalous and slanderous memoirs to a ghost writer, he takes a hand to solve the murder with his friend Chief Inspector Masters, and brings things to a head just as another death occurs.

The Skeleton in the Clock

The Punch and Judy Murders

The Adventures of Sherlock Holmes

The Cat Who Ate Danish Modern