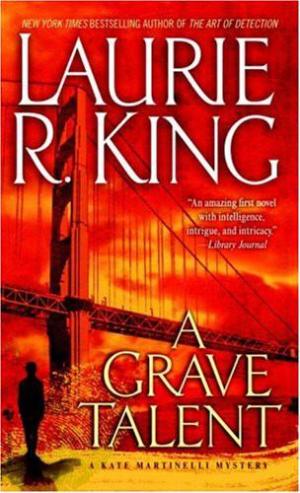 This gripping debut of the Kate Martinelli mystery series won the Edgar Award for Best First Mystery, generating wide critical acclaim and moving Laurie R. King into the upper tier of the genre. As A Grave Talent begins, the unthinkable has happened in a small community outside of San Francisco. A string of shocking murders has occurred, each victim an innocent child. For Detective Kate Martinelli, just promoted to Homicide and paired with a seasoned cop who's less than thrilled to be handed a green partner, it's going to be a difficult case. Then the detectives receive what appears to be a case-breaking lead: it seems that one of the residents of this odd, close-knit colony is Vaun Adams, arguably the century's greatest painter of women, a man, as it turns out, with a sinister secret. For behind the brushes and canvases also stands a notorious felon once convicted of strangling a little girl. What really happened on that day of savage violence eighteen years ago? To bring a murderer to justice, Kate must delve into the artist's dark past--even if she knows it means losing everything she holds dear.

The Daughters of Cain