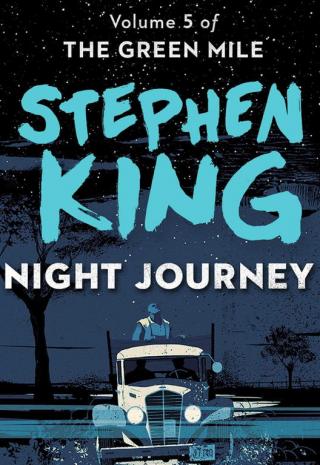 The Green Mile, Stephen King’s #1 New York Times bestselling novel, was first published twenty years ago in six original paperback installments. Inspiration for the Oscar-nominated film starring Tom Hanks about an innocent man on death row, The Green Mile is now available for the first time in e-serial form. Night Journey is Volume Five.
Prison Warden Hal Moores isn’t just Paul Edgecombe’s boss—Hal and his wife Melinda are also friends with Paul and his wife Janice. When Paul learns that Melinda has a brain tumor, he realizes that John Coffey can use his astonishing gift to heal her. Though Paul understands that the warden would never allow John to leave the prison, and Melinda can’t enter it, he also knows that John is Melinda’s only hope for survival. And so Paul and other E Block guards devise a dangerous plan that risks their jobs—not something to take lightly in 1932—as well as their lives. They decide to spirit John away into the night and beyond the confines of the Green Mile.

The Bad Death of Eduard Delacroix

The Mouse on the Mile

Coffey on the Mile