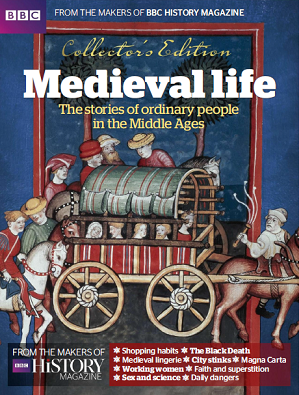 The medieval era is often viewed through the eyes of the elites: the kings, queens, knights and church leaders who dominated Europe at the time. But what would life have been like for the ordinary people who made up the vast majority of the population during this period?
In this special edition of BBC History Magazine, a host of expert historians seek to answer that question. Find out how people in the Middle Ages felt about the world around them – from religion and the social order to sex, disease and death.
You will also discover what it was like to work, shop, travel and dress as a medieval person would have done. Plus, brace yourself for our rundown of the greatest dangers of the Middle Ages and the worst smells to afflict a medieval nose. As befits the year of the Magna Carta 800th anniversary, we have also included a piece that analyses what the great charter meant for society at large.
We have put together this special edition by compiling some of the finest articles on medieval society to have appeared in BBC History Magazine over the years. I hope that you find it a stimulating read and that it will encourage you to try our monthly magazine – if you haven’t already – where we will continue to explore the medieval world on a regular basis.

The Story of the Normans

The Secret History of Spies

The World of Shakespeare

The World of the Georgians

The Story of the Holy Land

The Story of Vikings and Anglo-Saxons