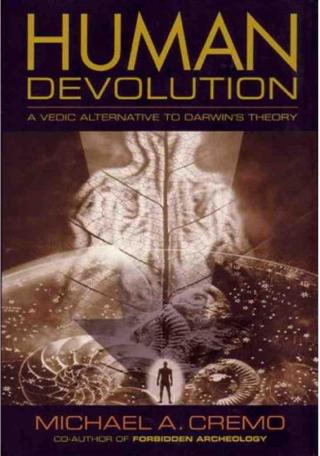 In their 1993, 900-page tome, Forbidden Archeologyand its condensed version, Hidden History of the Human Race, co-authors Michael Cremo and Richard Thompson brought forth largely unknown evidence illustrating that modern humans worked and walked the earth millions of years ago, even as far back as 2 billion years ago.
In his sequel, Human Devolution: A Vedic Alternative to Darwin’s Theory, Cremo suggests that human beings “did not evolve up from matter; instead we devolved, or came down, from the realm of pure consciousness, spirit.”
Cremo sees “a new consciousness emerging that integrates science and religion into a cohesive paradigm of reality.”
Yes, the emerging paradigm is a spiritual one, but it’s Universalist in scope. The Intelligent Design movement is not just comprised of Christians: atheists, new agers, conspiracy theorists, and yes, Hare Krishnas, have joined the ranks. After 150 years, Darwin’s theory is a flop and a diverse body of transcendent philosophies promises to undermine its authority.