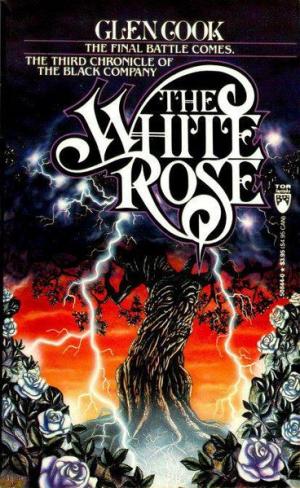 There was an instant of utter stillness when the boundary reached me. Then a roar out of hell. The winds inside were ferocious. I thought of nothing but getting down and hanging on. Around me gear was flying about, changing shape as it flew. Then I spied Goblin. And nearly threw up.
Goblin indeed. His head had swelled ten times normal size. The rest of him looked inside out. Around him swarmed a horde of the parasites that live on a windwhale’s back, some as big as pigeons.
Tracker and Toadkiller Dog were worse. The mutt had become something half as big as an elephant, fanged, possessed of the most evil eyes I’ve ever seen. He looked at me with a starved lust that chilled my soul. And Tracker had become something demonic, vaguely apelike yet certainly much more. Both looked like creatures from an artist’s or sorcerer’s nightmares.

She Is The Darkness