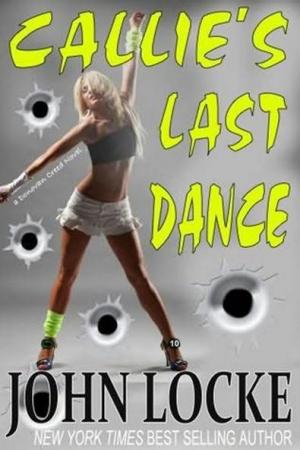 With Lou Kelly dead, the powerful people behind Sensory Resources are scrambling to find a new Agency Director. So far they can only agree on one thing: it can’t be Donovan Creed. Unfortunately for them, he’s the only game in town.
Meanwhile, in Las Vegas, Willow Breeland, the world’s most ambitious eighteen-year-old, hatches a plan to gain control of mob boss Carmine Porello’s strip club. But her plan depends on gaining the trust and support of Callie Carpenter’s live-in lover, Gwen Peters, and Donovan Creed’s daughter, Maybe Taylor.
Against this backdrop, Donovan and his top assassin, Callie Carpenter, have fallen in love. But if things don’t work out for them as a couple, they’ve already privately chosen their next conquest: a breathtakingly beautiful private detective named Dani Ripper, who seems to find both killers equally fascinating.
Callie’s Last Dance is vintage Locke. Enjoy the ride!
Preliminary Reviewer Comments:
“From the very first page of Callie’s Last Dance I got the same feelings I always get when reading a John Locke novel: I’m on a wild ride with my best friend, we’re going to have a wonderful time together, and there’s no place on earth I’d rather be!”
“The extended cold shower I had to take after reading a particular section of Callie’s Last Dance saved me enough electricity to pay for the book!”
“Callie’s Last Dance is a treasure trove of laughter, shock, and good times. So much to love, here is yet another John Locke book you won’t be able to put down. Long-time readers will be thrilled to finally meet the members of Lou Kelly’s Geek Squad.”
“Everyone at my office knows when John Locke brings out a new book. Not because I tell them, but because I call in sick so I can devour it from cover to cover in one sitting. Callie’s Last Dance is no exception. Either call in sick or stay up all night reading it.”

The Love You Crave

Now & Then: a Donovan Creed Novel