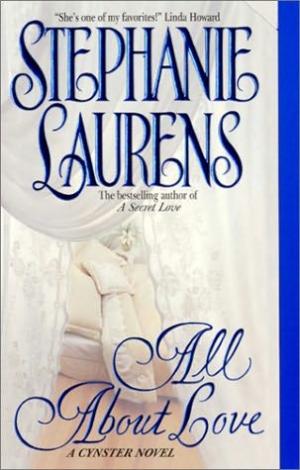 Six notorious cousins, known to the ton as the Bar Cynster, have cut a swath through the ballrooms of London. Yet one by one, each has fallen in love and married the woman of his heart, until only one of them is left unclaimed...the most rakish of Stephanie Laurens' captivating clan...and he's not about to go easily.Alasdair Cynster - known to his intimates as Lucifer - decides to rusticate in the country before the matchmaking skills of London's mamas become firmly focused on him, the last unwed Cynster. But an escape to Devon leads him straight to his destiny in the irresistible form of Phyllida Tallent, a willful, independent beauty of means who brings all his masterful Cynster instincts rioting to the fore. Lucifer tries to deny the desire Phyllida evokes - acting on it will land him in a parson's mousetrap, one place he's sworn never to go. But destiny intervenes, leaving him to face the greatest Cynster challenge - wooing a reluctant bride.

Phyllida has had a bevy of suitors - her charm and wit are well known throughout the countryside - but none of them has tempted her the way Lucifer does. His offer to teach her all about the ways of love is almost too tantalizing to resist. And though she's not yet completely surrendered, she knows only a fool stands against a Cynster...and Phyllida is no one's fool.

On a Wild Night

Комментарии к книге "All About Love"