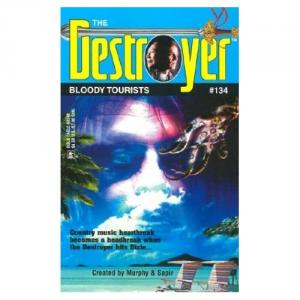 A-Kickin' and A-Grinnin'
The tiny Caribbean tourist trap of Union Island wants to declare its independence from the U.S. And while baby-faced island leader Greg Grom's "Free Union Island" movement is taken about as seriously as a summer day, good ol' Greg is touring Dixieland's hot spots, from the honky-tonks to the hee-haws, trying to rally support for the cause. And some weird stuff is happening . . .
Ordinary beer-swilling, foot-stomping, line-dancing yahoos are running amok, brawling like beasts on a rampage. Remo Williams -- currently not experiencing a lot of job satisfaction as Reigning Master -- spots the connection between the doofball from Union Island and the redneck killer zombies. And he's pretty sure Greg is slipping something into the local brew, but the why is another matter. No biggie. Remo's not in a mood to make friends, or deal with the Chiun's abuse or CURE's insults. He's here to smoke some bacon. Happily.