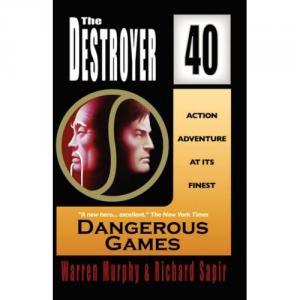 The Olympics promise to be a rare relaxation in the tensions between the States and Russia, until a racial purist decides to punish America's multi-racial track-and-field team. The Americans, Russians, and Germans are confident that they can stop this racial terrorism until a bomb explodes in the super-secure Olympic village, killing two Russian security guards just before the torch is lit. As the threats come racing in, CURE's agents Remo and Chiun put on their running shoes.and join the U.S.'s Olympic team. Enlisting the aid of a beautiful and flexible Indian gymnast, Remo and Chiun race to track down the terrorists who vow to permanently disqualify America's track-and-field squad. But when the terrorists turn on Remo and Chiun, it's a sprint to the finish for CURE's agents to keep the Olympic torch aflame.