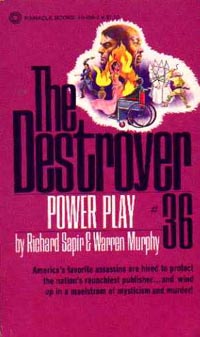 Wesley Pruiss was just a misunderstood and misled publishing entrepreneur. The dirtier his little magazine got the more money he made. There seemed to be no limit to the dirt or the money. His full-color monthly, called Gross, soon spawned a chain of raunchy nightclubs ("Grossouts") and now a spectacular motion picture was being planned. Disgusting un-American, even.

Enter Remo and Chiun. Not to destroy, but to protect! Disgusting, but very American.

Who'd want to kill a dirty publisher? Why worry about the rottenest, most depraved publication in history?

Because of the oil industry and their concern over the growth of solar energy, obviously. Oil makes the world go round. It'd be perverse to think otherwise.

..as you'll quickly learn in this thirty-sixth volume in the violent chronicle of the Destroyer, the invincible shatterer of worlds from Sinanju.