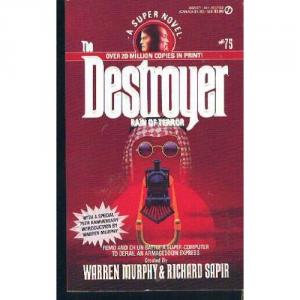 Chicken Little was Right!
Well, maybe the sky wasn't falling-but something was falling from the sky. Something that stunned America's scientists, stupefied America's security forces, and sent the new U.S. President miles underground to dodge the hellish hailstorm of unidentified falling objects.
What was this infernal armada of UFO's? And who could stop it as it shattered one city after another? The only answer in America's arsenal was Remo and Chiun-as they shot into action against a mad dictator who stopped at nothing and a smart computer than knew all the answers..including the secret of how to outwit the wise and wily Chiun and destroy the indestructible Destroyer.