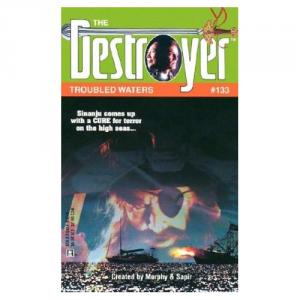 Not So Jolly Roger . . .
Complete with skull and crossbones fluttering in the wind, "Captain" Thomas Kidd is the new scourge of the Caribbean, raiding unsuspecting pleasure craft and pursuing the great piratical tradition of looting, pillaging and plant walking. The bloodthirsty crew tosses the lucky ones overboard, while saving the women for dessert at Kidd's private island hell.
When these maritime marauders kidnap the daughter of a senator, CURE sets out to kick some serious pirate booty. Posing as rich tourists. Remo and Chiun set a course for the tropics to tempt these freebooters into the mistake of their career. But Remo soon fines himself swimming with sharks while Chiun senses some illicit treasure in his future. Even so, they are ready to dispatch the sea raiders to an afterlife between the devil and the deep blue sea.

A Talent For War