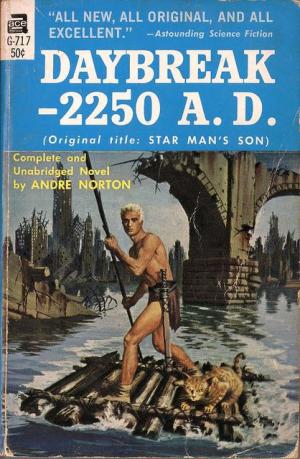 Two centuries after an atomic war on earth, a silver-haired mutant sets out on a dangerous search for a lost city of the ruined civilization.
Review Submitted by Ralph Couey
It is almost 200 years since the global destruction wrought by nuclear war. The tools of man’s technology lie rusting alongside the roads between ruined cities. In the mountains, the descendants of people who were training to colonize other worlds when war broke out, struggle to survive. But in their zeal to maintain the purity of the human race in the face of radiation-caused genetic mutations, the Tribe of the Eyrie have isolated and even killed those with characteristics that drift from the norm of humanity. Onto this stage steps a young man named Fors. The son of an honored explorer, a Star Man, has been denied the honor of becoming what his father had been, the courageous explorers who went into the lowlands searching the moldering cities for technology and devices to help their people survive, and more importantly, knowledge of what happened and why. Bitter and angry at the tribe’s rejection, Fors leaves the mountain stronghold of his people and sets out alone on a trail that will change the history of not only his tribe, but all that remains of the human race.
Andre Norton’s book, originally titled “Star Man’s Son,” foretells a cautionary tale of the future, one in which humans still have not learned the lessons of the past. The journey of Fors is a fascinating depiction of what the world would be like after the last great war of technology. In this world, the survivors of the human race have separated into tribes, each jealously guarding a swath of territory. Relationships between the tribes are bound in suspicion and conflict, but the real hatred is shared by all for the dwellers of the urban ruins, a human-rat hybrid known as the Beast Things.
Although all of the human tribes strive to turn their backs on those characteristics which drove their ancestors, known universally as The Old Ones, to war and destruction. But as the situation has developed, Norton makes it clear that conflict is an irrefutable part of the human make-up and despite the naive desire for “world peace,” it would seem that humans will always reach first for the spear. The climax of the book, when the tribes gather for one last great battle against each other, becomes the moment when Fors steps forward and restores peace. He reminds all present that everyone faces a common enemy in the Beast Things and if humanity is to survive, that they must all band together in mutual support, or by choosing to exterminate each other, leave the planet to the Beast Things.
Norton has crafted a tale that is part Star Wars, Terminator 3, and part Lord of the Rings, although its publishing date, 1952, predates all three. In the ruined cities, we are forced to come to grips with the truth that even in the face of a terrible lesson, we still run the risk of destroying our each other. In the conflict between the tribes, we are challenged to rise above our primitive instincts and choose survival. In the travels of Fors, we find our own restless desires to go beyond the horizon; to seek knowledge of distant lands and unknown peoples. And through Fors’ eyes, we discover that we can choose friendship; we can choose life; we can choose peace.
There few problems with this story, the most pronounced being that it would be virtually impossible for a genetic mutation such as the Beast Things to rise to such an advanced level in less than 200 years. Perhaps 2000 years, but then there would be precious little evidence of the Old Ones left for exploration. The dialogue is pure Tolkien, and at times almost descends into Iambic Pentameter. Despite the stilted language, however, the story is clearly and descriptively told. The descriptions of the landscape and the cities, as well as the countryside between, tantalizes the reader to consult a road atlas to identify the land where Fors traveled. Sometimes, the reader is convinced that Fors is in Illinois, in fact the description of the big city that Fors discovers sounds suspiciously like Chicago. Other times, it seems he travels through New England.
At 191 pages, it is a short read, but an intense one. The book moves along rapidly from start to finish and Norton has taken the reader along for the breathless journey. If you enjoyed Tolkien and Lucas, and you have a desire to view the remains of an apocalyptic future, then this book is for you.

Мы, женщины [We, the Women-ru]

The Northland Chronicles: A Stranger North