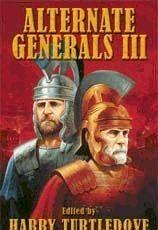 With its dual portrait of generals Grant and Lee on opposing sides of the Roman Civil War, the jacket of editor Turtledove's solid third alternative military history anthology neatly evokes this popular subgenre. While there's no such story, Robert E. Lee must decide, as the ambassador to Britain of a victorious but ostracized Confederacy, where his true loyalties lie in Lee Allred's provocative "East of Appomattox." Similarly, Roland J. Green's " 'It Isn't Every Day of the Week' " shows how altering the outcome of a few minor incidents can turn history on its head, making General "Old Hickory" Jackson and the Cherokee Nation allies when the U.S. is drawn into the Napoleonic wars. Chris Bunch's "Murdering Uncle Ho" vividly demonstrates the wisdom of "be careful what you wish for" in the book's most intensely drawn battle sequences; this tale of an alternative Vietnam War draws some disturbing parallels with Iraq, as does Turtledove's own "Shock and Awe." Esther M. Friesner's "First, Catch Your Elephant" may not tell us much about Hannibal, but it succeeds marvelously as comedy.

The Future We Wish We Had

If I Were an Evil Overlord