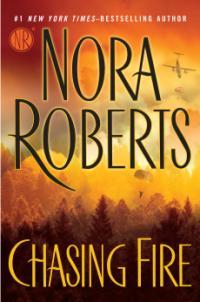 This searing stand-alone from bestseller Roberts (The Search) celebrates the smoke jumpers of Missoula, Mont., who routinely risk life and limb to beat down raging forest fires. As close knit as any military combat unit, the "Zulies" include veteran Rowan Tripp, haunted by the loss of Jim Brayner, her onetime jump partner who was killed the previous season in a fall, and rookie Gulliver Curry, who soon earns the nickname "Fast Feet" for his speed and prowess. Threatening trouble is cook Dolly Brakeman, Jim's girlfriend, who blames Rowan for his death—and whose new baby may well be Jim's. Rowan and Gull grow closer as the team battles fires from Montana and Idaho to California and Alaska. Meanwhile, the Zulies are plagued by vandalism and sabotage as well as a killer with arson among his crimes.