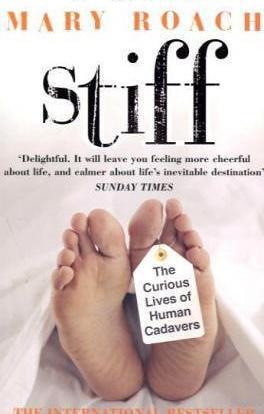 “One of the funniest and most unusual books of the year…. Gross, educational, and unexpectedly sidesplitting.”
—Entertainment Weekly

Stiff is an oddly compelling, often hilarious exploration of the strange lives of our bodies postmortem. For two thousand years, cadavers—some willingly, some unwittingly—have been involved in science’s boldest strides and weirdest undertakings. They’ve tested France’s first guillotines, ridden the NASA Space Shuttle, been crucified in a Parisian laboratory to test the authenticity of the Shroud of Turin, and helped solve the mystery of TWA Flight 800. For every new surgical procedure, from heart transplants to gender reassignment surgery, cadavers have been there alongside surgeons, making history in their quiet way.
In this fascinating, ennobling account, Mary Roach visits the good deeds of cadavers over the centuries—from the anatomy labs and human-sourced pharmacies of medieval and nineteenth-century Europe to a human decay research facility in Tennessee, to a plastic surgery practice lab, to a Scandinavian funeral directors’ conference on human composting. In her droll, inimitable voice, Roach tells the engrossing story of our bodies when we are no longer with them.
From Publishers Weekly

“Uproariously funny” doesn’t seem a likely description for a book on cadavers. However, Roach, a Salon and Reader’s Digest columnist, has done the nearly impossible and written a book as informative and respectful as it is irreverent and witty. From her opening lines (“The way I see it, being dead is not terribly far off from being on a cruise ship. Most of your time is spent lying on your back”), it is clear that she’s taking a unique approach to issues surrounding death. Roach delves into the many productive uses to which cadavers have been put, from medical experimentation to applications in transportation safety research (in a chapter archly called “Dead Man Driving”) to work by forensic scientists quantifying rates of decay under a wide array of bizarre circumstances. There are also chapters on cannibalism, including an aside on dumplings allegedly filled with human remains from a Chinese crematorium, methods of disposal (burial, cremation, composting) and “beating-heart” cadavers used in organ transplants. Roach has a fabulous eye and a wonderful voice as she describes such macabre situations as a plastic surgery seminar with doctors practicing face-lifts on decapitated human heads and her trip to China in search of the cannibalistic dumpling makers. Even Roach’s digressions and footnotes are captivating, helping to make the book impossible to put down.
Copyright 2003 Reed Business Information, Inc.

Adult/High School-Those curious or brave enough to find out what really happens to a body that is donated to the scientific community can do so with this book. Dissection in medical anatomy classes is about the least bizarre of the purposes that science has devised. Mostly dealing with such contemporary uses such as stand-ins for crash-test dummies, Roach also pulls together considerable historical and background information. Bodies are divided into types, including “beating-heart” cadavers for organ transplants, and individual parts-leg and foot segments, for example, are used to test footwear for the effects of exploding land mines. Just as the nonemotional, fact-by-fact descriptions may be getting to be a bit too much, Roach swings into macabre humor. In some cases, it is needed to restore perspective or aid in understanding both what the procedures are accomplishing and what it is hoped will be learned. In all cases, the comic relief welcomes readers back to the world of the living. For those who are interested in the fields of medicine or forensics and are aware of some of the procedures, this book makes excellent reading.
Pam Johnson, Fairfax County Public Library, VA
Copyright 2003 Reed Business Information, Inc.

* * *
Whether buried, burnt, snatched, dissected or decomposed, some people have been more useful dead than alive. From testing the efficiency of the guillotine, experiments to determine the weight of the soul, and calibrating crash-test dummies, to advances in modern medicine, the deceased body has been a silent partner to many of the major advances in the understanding of ourselves.
In this fascinating, unusual exploration into the macabre, Mary Roach’s search for the many uses of the human body stretches from China and the myth of human dumplings, the ghoulish history of nineteenth-century body-snatching and experiments involving crucifixion to check the veracity of the Turin Shroud, to a present-day Body Farm, plastic-surgery labs and conferences on human composting.
Stiff tells a story of the last 2,000 years, in which cadavers have been at the forefront of scientific exploration: from Ancient Egypt to medieval pharmacies — and even the contemporary labs that have successfully performed a head transplant on a monkey. Combining riveting story-telling with science, history and reportage, Stiff is one of the funniest, most intriguing books you will ever read.

My Planet: Finding Humor in the Oddest Places

Gulp: Adventures on the Alimentary Canal