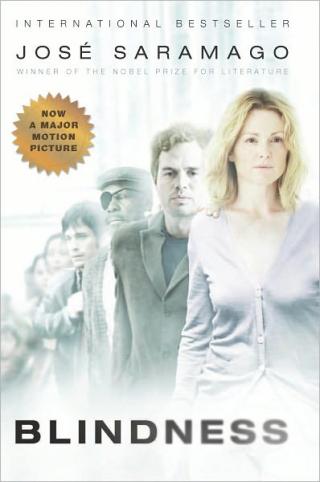 Without warning, a driver waiting at traffic lights goes blind.A good samaritan takes pity on him, and drives him home to his wife. The next morning, the wife takes her husband to see an optician, who is baffled. That afternoon, the wife goes blind. So does the samaritan. The following morning, the doctor goes blind. Later that day, one by one, the doctor's patients go blind.The contagion spreads through the city. Panicked, the government sets up internment camps, and rounds up the blind. The camps are undermanned and underprovisioned. Thereafter, the situation deteriorates.Standard SF plot, right? Reminiscent of John Wyndham, in fact: total breakdown of society in the face of inexorable disaster. Except the novel I'm describing is Blindness, written by Jose Saramago, 1998 winner of the Nobel Prize for Literature. I first saw Blindness mentioned a couple of years ago, in one of Robert Silverberg's columns for Asimov's. I meant to get hold of a copy – Nobel Prize-winning speculative fiction seeming too good a chance to pass up – but somehow forgot and it was only when a customer came in before christmas to request a copy that I remembered it.There's something more, though, something I haven't told you about the novel. It's the writing style. Saramago uses only commas and periods to punctuate his sentences. That means no hyphens, no semicolons – and no quotation marks, either. Speech runs on in a sprawling mess, How does that work, By separating each statement with a comma and a capital, Oh I see, It takes a while to get used to. I initially thought it was clever; none of the characters are named, either, merely referred to by their position – the first man, the doctor's wife, the man with the black eye-patch, and so on – and the combination of the two is intensely claustrophobic. You never quite feel you can see what's going on, you feel that your viewpoint is constrained – in fact, you feel partially blind. I was somewhat disappointed when I opened one of Saramago's other novels to find exactly the same style; apparently, his books are experiments in timbre and rhythm and pace, and he merely feels that punctuation gets in the way.That aside, the novel is very good, both as a novel and as science fiction. The breakdown of order, the process of the progression of the blindness – the inevitability of it – is the main thrust of the novel, with the characters doing what they must to survive. In places, the novel is bleak, and brutal; in places, as you might expect from a novel employing a metaphor of such grand power and conception, it is genuinely enlightening. It is never boring, though, even when Saramago is describing the minutiae of life in one of the blind camps, and even when you're struggling through a particularly dense page of exposition and authorial asides directed squarely at the reader. Recommended.