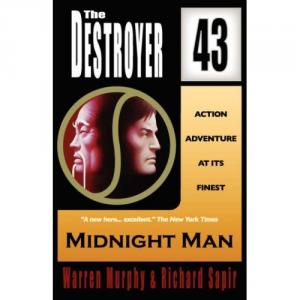 Now you see him, now you don't! Law-enforcement officials think they've see everything until they bump into Elmo Wimpler, the inventor of a substance that can make anything invisible. Wimpler's found his niche in life by dropping out of sight - literally - and killing with a device that crushes skulls. His victims are multiplying, there are no clues in sight, and authorities are groping in the dark. Under suspicion themselves, Remo and Chiun set out to play blindman's buff with the killer no one can see, but they, too, draw a blank. As they stalk their quarry sight unseen, the assassin's ultimate target materializes a deposed Middle Eastern sovereign with a $25 million price tag on his head. The United States has granted him asylum, and it's up to Remo and Chiun to bring the curtain down on Wimpler's operation before he sends the monarch to Kingdom Come . . .