The Best of Lucius Shepard 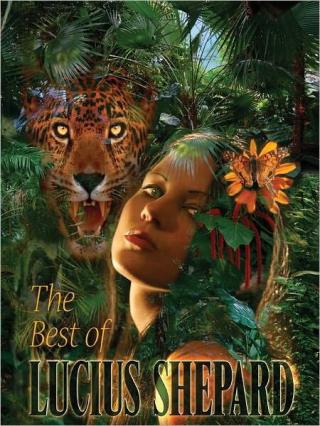 Lucius Shepard writes from the darkest, truest heart of America—not the heart of the United States or of North America, but all of America—and he writes of it with rare passion, honesty and intelligence. His earliest stories, the ones that made his name a quarter of a century ago were set in the jungles of South America and filled with creatures dark and fantastical. Stories like “Salvador”, “The Jaguar Hunter”, and the excoriatingly brilliant “R&R” deconstructed war and peace in South America, in both the past and the future, like no other writer of the fantastic.
A writer of great talent and equally great scope, Shepard has also written of the seamier side of the United States at home in classic stories like “Life of Buddha” and “Dead Money”, and in “Only Partly Here” has written one of the finest post-9/11 stories yet. Perhaps strangest of all, Shepard created one of the greatest sequence of “dragon” stories we’ve seen in the tales featuring the enormous dragon, Griaule.
The Best of Lucius Shepard is the first ever career retrospective collection from one of the finest writers of the fantastic to emerge in the United States over the past quarter century. It contains nearly 300,000 words of his best short fiction and is destined to be recognized as a true classic of the field.
From Publishers Weekly
Starred Review. This fine selection of some of the best short fiction by one of the most respected dark fantasy writers in the world will be a must purchase for aficionados of the genre. Among the stories included are The Man Who Painted the Dragon Griaule, wherein an artist devotes his life to the illumination of a dormant, mile-long dragon; Salvador, where a Vietnam-like conflict rages in a future Central America; Jack’s Decline, the sly and gruesome tale of an elderly Jack the Ripper confronting Nazi Germany; Radiant Green Star, set in a future Southeast Asia replete with circuses, revenge and the last living American POW; and Only Partially Here, a harrowing tale of strange happenings in the pit left by the fall of the World Trade Center. Shepard is fantasy literature’s Joseph Conrad or perhaps its Saul Bellow, a writer who never tires of staring directly into the abyss. (Aug.)
Copyright © Reed Business Information, a division of Reed Elsevier Inc. All rights reserved.