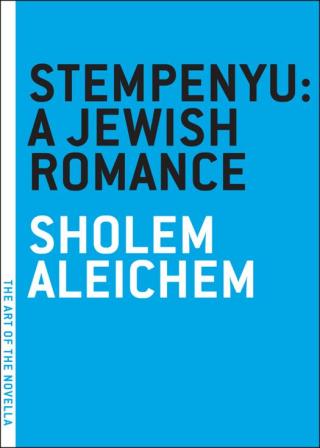 Even the most pious Jew need not shed so many tears over the destruction of Jerusalem as the women were in the habit of shedding when Stempenyu was playing.
The first work of Sholom Aleichem’s to be translated into English — this long out-of-print translation is the only one ever done under Aleichem’s personal supervision — Stempenyu is a prime example of the author’s hallmark traits: his antic and often sardonic sense of humor, his whip-smart dialogue, his workaday mysticism, and his historic documentation of shtetl life.
Held recently by scholars to be the story that inspired Marc Chagall’s “Fiddler on the Roof” painting (which in turn inspired the play that was subsequently based on Aleichem’s Tevye stories, not this novella), Stempenyu is the hysterical story of a young village girl who falls for a wildly popular klezmer fiddler — a character based upon an actual Yiddish musician whose fame set off a kind of pop hysteria in the shtetl. Thus the story, in this contemporaneous “authorized” translation, is a wonderful introduction to Aleichem’s work as he wanted it read, not to mention to the unique palaver of a nineteenth-century Yiddish rock star.
Review

“I wanted them all, even those I'd already read.”
—Ron Rosenbaum, The New York Observer

“I’ve always been haunted by Bartleby, the proto-slacker. But it’s the handsomely minimalist cover of the Melville House edition that gets me here, one of many in the small publisher’s fine ‘Art of the Novella’ series.”
—The New Yorker

“The Art of the Novella series is sort of an anti-Kindle. What these singular, distinctive titles celebrate is book-ness. They’re slim enough to be portable but showy enough to be conspicuously consumed — tiny little objects that demand to be loved for the commodities they are."
—KQED (NPR San Francisco)

“Some like it short, and if you’re one of them, Melville House, an independent publisher based in Brooklyn, has a line of books for you… elegant-looking paperback editions… a good read in a small package.”
—The Wall Street Journal