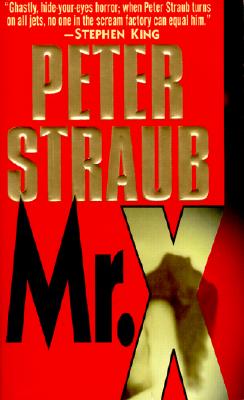 Every year on his birthday, Ned Dunstan is cursed with visions of horror committed by a savage figure he calls "Mr. X." This year, Ned's visions will become flesh and blood.

A dreadful premonition brings Ned home to find his mother on her deathbed. She reveals the never-before-disclosed name of his father and warns him of grave danger. Driven by a desperate sense of need, Ned explores his dark past and the astonishing legacy of his kin. Accused of violent crimes he has not committed and pursued by a shadowy twin, Ned enters a hidden world of ominous mysteries, where he must confront his deepest nightmares. . . .
______________
Since the publication of Koko in 1988, Straub has specialized in macabre mysteries dense with the details of small-town life and cast with ordinary people who find that the extraordinary crimes they investigate raise doubts about their own moral integrity. In this bravura new outing, he returns to his horror roots, lacing an ingenious whodunit with an intoxicating shot of the supernatural. From childhood, Ned Dunstan has experienced precognitive visions, a recurring dream of being tethered to a shadow and "the sense that something crucially significant, something without which I could never be whole, was missing." Summoned home to Edgerton, Ill., by a premonition of his mother's death on the eve of his 35th birthday, Ned finds himself implicated in a tangle of felonies and murders, all of which point to someone strenuously manipulating events to frame him. Digging into local history, he finds reason to believe that the mysterious father he never knew, or possibly a malignant doppelg?nger, are pulling the strings. Meanwhile, Mr. X, a homicidal misanthrope who reads H.P. Lovecraft's otherworldly horror fiction as gospel, cuts a swath of supernatural destruction across the country, en route to a showdown with his son, the "shadow-self" whom he must annihilate. Discerning readers will recognize this surprise-filled tale of tortuous family relationships as a modern variation on Lovecraft's classic shocker "The Dunwich Horror." But Straub turns his pulp model inside out, transforming its vast cosmic mystery into an ingrown odyssey of self-discovery and a probing study of human nature. His evocative prose, a seamless splice of clipped hard-boiled banter and poetic reflection, contributes to the thick atmosphere of apprehension that makes this one of the most invigorating horror reads of the year. BOMC main selection. (Aug.) FYI: This spring, Subterranean Press published a chapbook, Peter and PTR: Two Discarded Prefaces and an Introduction, that includes framing material that Straub wrote for, and then cut from, Mr. X.

In the Night Room