No Excuses!: The Power of Self-Discipline 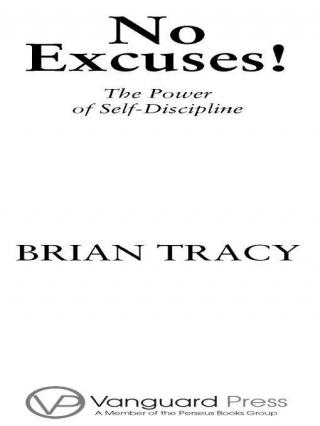 Why are some people more successful than others? Why do some people make more money, live happier lives, and accomplish much more in the same number of years than the great majority? What is the real “secret of success?”Often I begin a seminar with a little exercise. I ask the audience, “How many people here would like to double their income?”Almost everyone smiles and raises their hands. I then ask, “How many people here would like to lose weight? Get out of debt? Achieve financial independence?”Again, everyone smiles, some people cheer, and they all raise their hands. Then I say, “Wonderful! These are great goals that everyone has. We all want to make more money, spend more time with our families, be fit and trim, and achieve financial independence.“Not only do we all want the same things, but we all know what we have to do to achieve them. And we all intend to do those things, sometime. But before we get started, we decide that we need to take a little vacation to a wonderful fantasy place called ‘Someday Isle.’“We say that ‘Someday I’ll read that book. Someday I’ll start that exercise program. Someday I’ll upgrade my skills and earn more money. Someday I’ll get my finances under control and get out of debt. Someday I’ll do all those things that I know I need to do to achieve all my goals. Someday.’”Probably 80 percent of the population lives on Someday Isle most of the time. They think and dream and fantasize about all the things they are going to do “someday.”And who are they surrounded by on Someday Isle? Other people on Someday Isle! And what is the chief topic of conversation on Someday Isle? Excuses! They all sit around and swap excuses for being on the island.“Why are you here?” they ask each other.Not surprising, their excuses are largely the same: “I didn’t have a happy childhood,” “I didn’t get a good education,” “I don’t have any money,” “My boss is really critical,” “My marriage is no good,” “No one appreciates me,” or “The economy is terrible.”They have come down with the disease of “excusitis,” which is invariable fatal to success. They all have good intentions, but as everyone knows, “The road to hell is paved with good intentions.”The first rule of success is simple: Vote yourself off the island!No more excuses! Do it or don’t do it—but don’t make excuses. Stop using your incredible brain to think up elaborate rationalizations and justifications for not taking action. Do something. Do anything. Get on with it! Repeat to yourself: “If it’s to be, it’s up to me!”Losers make excuses; winners make progress. Now, how can you tell if your favorite excuse is valid or not? It’s simple. Look around and ask, “Is there anyone else who has my same excuse who is successful anyway?”When you ask this question, if you are honest, you will have to admit that there are thousands and even millions of people who have had it far worse than you have who have gone on to do wonderful things with their lives. And what thousands and millions of others have done, you can do as well—if you try.It has been said that if people put as much energy into achieving their goals as they spend making up excuses for failure, they would actually surprise themselves. But first, you have to vote yourself off the island.

Комментарии к книге "No Excuses!: The Power of Self-Discipline"