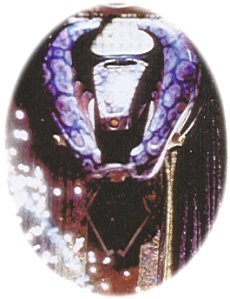 The year is 2261.  Earth and Minbar both lie in ruins.  Babylon 4 has been sent back in time a thousand years, bearing the prophet Valen, and John Sheridan has been healed of his infection and his injuries.  But at what cost?

For one brief moment in time the war halts, and the galaxy hangs with bated breath, waiting for events happening outside its consciousness.  Sinoval receives a message of grave import, Londo meets a most unexpected guest, the Shadows come to Sanctuary.... and at the edge of space, the Blessed Delenn arrives at Z'ha'dum to meet her destiny.

Deep beneath Z'ha'dum Delenn meets the First One, and is presented with the choice the technomages spoke of so long ago.  How will she choose - the safety of all that is, against the hope of all that is to come?  Meanwhile there are two very different homecomings - for Mr. Morden, and for Captain Sheridan.... and there is a bitter discovery in store for Sinoval.

There is a fine line between vendetta and obsession, between genius and madness.  In his quest for revenge, Sinoval has crossed that line.  Ignoring advice from his allies, heedless of warnings from his friends, he returns to the site of his greatest triumph to gain his greatest prize.  He is willing to die trying, but the true, terrible cost of his actions will be too great even for him to accept...

A choice was made freely, and when she made it Delenn thought she understood the price.  She did not.  But now she will.  She was willing to sacrifice her own life, but the universe will demand more than that.  Much more, indeed.

The forces of destiny begin to converge on Proxima as the war comes to the home of humanity.  As internecine power struggles grip the heart of the Resistance Government and Delenn lies helpless in a forgotten and abandoned place, a dark plan nears fruition and a terrible punishment is prepared.  Humanity chose wrongly, out of fear and out of fury, and the punishment for that choice may well be the extinction of all that they are, and all they will ever be.

In the aftermath of the Battle of Proxima there is a brief moment of respite - a chance to rest, to heal, to forgive, and to remember.  A dying man's confession speaks of the past to one who looks to the future; and for two old friends there is a reconciliation, and a night dedicated to facing unpleasant news and dark choices.

For millennia the Shadows have walked above the younger races, dark Gods of chaos, spreading anarchy and death where they passed.  Their day is nearly done.  Beaten back almost to their homeworld they prepare for the end, for a final act of revenge on the races that scorned their ideology.  An agent prepares a dark revenge on Proxima.  Kazomi 7 is engulfed by a fell and terrible cloud.  On Centauri Prime, the Shadow Criers ready for the ascension of their mad lord preaching his creed of fire.  Sinoval sets forth for the final meeting with his enemy  Sonovar, and takes the first step towards his greater destiny.  And a fleet, vaster and more powerful than any before assembled by the younger races, makes for Z'ha'dum.

Thus ends the Shadow War, and thus begins the great peace, but it is a peace built on sacrifice and bloodshed and lies.  The terrible toll of the war is beginning to tear some apart, while others are already preparing for the future.  Sinoval has three most unexpected meetings.  David Corwin learns something about love and loss.  Talia Winters makes a terrible discovery.  And the Vorlons meet with the Eldest for the first time in a millennium.