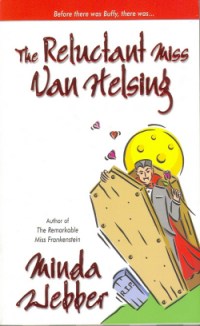 Having lived long amongst London's ton, Ethel Jane Van Helsing was an astute female who well knew her faults. Her skin was marred with freckles, her nose was too snub and her hair of a brown that reflected neither gold nor red highlights. She had a face unremarkable in its plainness. And yet...at a masquerade ball, anything could happen. There, until the stroke of midnight, even an ugly duckling could become a swan. But tonight was not for fowl play. You see, plain or not, Jane came from distinguished stock. Van Helsings. And Van Helsings didn't worry about soiling their pelisses; they were slayers. Where other young ladies were told no monsters lurked under their beds, Jane's parents had explained the often-handsome creatures lay in beds, crypts, and at balls like these. Her father, the Major, had shown her very early how to use the sharp end of a stick, where and when the sun didn't shine. Tonight, everything was at stake. Something was going to get driven very deep into a heart, or she wasn't the Reluctant Miss Van Helsing.