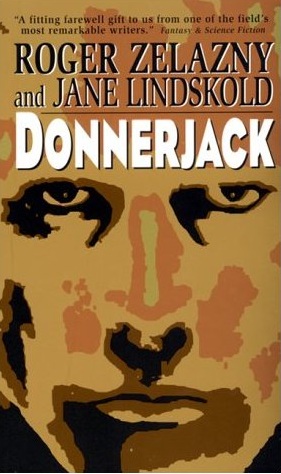 In our world, called the Verite, he is a Scottish laird, an engineer, and a master of virtual reality design. In the computer-generated universe of Virtu, created by the crash of the World Net, he is a living legend. Scientist and poet with a warrior’s soul, Donnerjack strides like a giant across the virtual landscape he helped to shape. And now he has bargained with Death himself for the return of love. The Lord of Entropy claimed Ayradyss, Donnerjack’s beloved dark-haired lady of Virtu, with no warning, leaving a hole in the Engineer’s heart. But Death offered to return her to him for a price: a palace of bones… and their first-born child. Since offspring have never before resulted from any union of the two worlds, Donnerjack accepts Death’s conditions—and leads his reborn lover far from the detritus and perpetual twilight of Deep Fields to his ancestral Scottish lands, hoping to build a sanctuary and a self for Ayradyss in the first world.
But there is no escaping, because cataclysmic change is taking place in Virtu. A bizarre new religion is sweeping through this ever-shifting universe where the homely can be virtually beautiful, the lame can walk and the blind can see. Now it’s threatening to spill over into Verite. And its credo is a call for a different kind of order. For all the ancient myths still occupy Virtu. And the Great Gods on Mt. Meru are amassing great armies in anticipation of the time when a vast computer system attempts to take over the reality that constructed it.