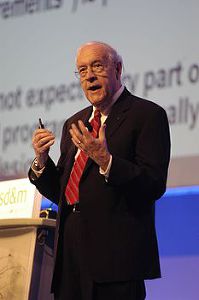 Brooks joined IBM in 1956, working in Poughkeepsie, New York and Yorktown, New York. He worked on the architecture of the IBM 7030 Stretch, a $10m scientific supercomputer of which nine were sold, and the IBM 7950 Harvest computer for the National Security Agency. Subsequently, he became manager for the development of the System/360 family of computers and the OS/360 software package. During this time he coined the term computer architecture.   It was in The Mythical Man-Month that Brooks made the now-famous statement: "Adding manpower to a late software project makes it later." This has since come to be known as the Brooks's law. In addition to The Mythical Man-Month, Brooks is also known for the paper No Silver Bullet — Essence and Accident in Software Engineering.   In 1965, Brooks accepted an invitation to come to the University of North Carolina at Chapel Hill and found the University's computer science department. He chaired it for 20 years. As of 2013 he was still engaged in active research there, primarily in virtual environments and scientific visualization.   In a 2010 interview by Kevin Kelly for an article[9] in Wired Magazine, Brooks was asked "What do you consider your greatest technological achievement?" Brooks responded "The most important single decision I ever made was to change the IBM 360 series from a 6-bit byte to an 8-bit byte, thereby enabling the use of lowercase letters. That change propagated everywhere."   A "20th anniversary" edition of The Mythical Man-Month with four additional chapters was published in 1995.   In January 2005 he gave the IEE/BCS annual Turing Lecture in London on the subject of "Collaboration and Telecollaboration in Design". In 1994 he was inducted as a Fellow of the Association for Computing Machinery.   As well as The Mythical Man-Month Brooks has authored or co-authored many books and peer reviewed papers[6] including Automatic Data Processing, No Silver Bullet, Computer Architecture, and The Design of Design