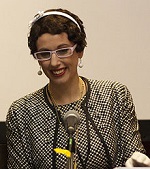 Gail Carriger is the pen name of Tofa Borregaard, an archaeologist and author of steampunk fiction. She was born in Bolinas, an unincorporated community in Marin County, California, and attended high school at Marin Academy. She received her undergraduate degree from Oberlin College, a masters of science in archaeological materials at England's Nottingham University in 2000, and a master of arts in anthropology (with a focus on archaeology) at the University of California Santa Cruz in 2008.
Carriger's first novel, Soulless, was published in 2009 by Orbit Books and earned her a nomination for the John W. Campbell Award for Best New Writer. The book was a Compton Crook Award nominee, a Locus Award finalist for Best First Novel, and Locus placed her on their recommended reading list. Her second novel, Changeless, was published in early 2010 and earned her a place on the New York Times Bestseller List. Her third novel, Blameless, was released in September 2010 and also became a New York Times bestseller. The planned five-book series continued with Heartless in late June 2011 and concluded with Timeless in March 2012. Carriger was the guest of honor at FenCon, a science fiction convention in Dallas, Texas, in September 2011. Carriger lists "PG Wodehouse, Austen, Dickens, and Victorian travel journals" as influences on her writing.
Carriger's next series, the four-book "Finishing School" series, is scheduled to launch with Etiquette & Espionage in February 2013 to be followed by Deportment & Deceit later that year. In July 2013, final cover art and synopsis for Etiquette & Espionage were revealed alongside with the announcement of the second Parasol Protectorate series entitled The Parasol Protectorate Abroad. First novel in the The Parasol Protectorate Abroad series will be called Prudence and second Imprudence.