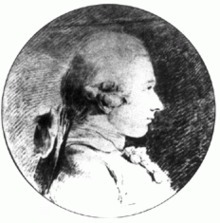 Donatien Alphonse François, Marquis de Sade was a French aristocrat, revolutionary politician, philosopher and writer, famous for his libertine sexuality. His works include novels, short stories, plays, dialogues and political tracts; in his lifetime some were published under his own name, while others appeared anonymously and Sade denied being their author. De Sade is best known for his erotic works, which combined philosophical discourse with pornography, depicting sexual fantasies with an emphasis on violence, criminality and blasphemy against the Catholic Church. He was a proponent of extreme freedom, unrestrained by morality, religion or law. The words sadism and sadist are derived from his name.

Sade was incarcerated in various prisons and in an insane asylum for about 32 years of his life; 11 years in Paris (10 of which were spent in the Bastille), a month in the Conciergerie, two years in a fortress, a year in Madelonnettes, three years in Bicêtre, a year in Sainte-Pélagie and 13 years in the Charenton asylum. During the French Revolution he was an elected delegate to the National Convention. Many of his works were written in prison.