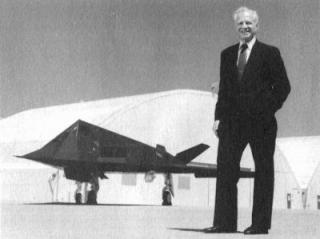 Ben R. Rich, (born June 18, 1925, Manila, Phil.—died Jan. 5, 1995, Los Angeles, Calif., U.S.), U.S. engineer who conducted top secret research on advanced military aircraft while working at Lockheed Aircraft Corporation (now Lockheed Martin Corporation) under an alias, which he was required to adopt for security reasons. Rich, known as Ben Dover, helped develop more than 25 airplanes, notably the F-117 Nighthawk stealth fighter-bomber, designed to elude detection on enemy radar screens; the SR-71 Blackbird, a reconnaissance craft that cruised at three times the speed of sound; and the U-2, the spy plane that flew missions over the Soviet Union from 1956 to 1960.

After earning a B.S. (1949) from the University of California, Berkeley, and an M.S. (1950) from the University of California, Los Angeles (UCLA), Rich joined Lockheed and was soon sent to its Advanced Development Projects (ADP) division, Burbank, Calif., under aircraft designer Kelly Johnson. ADP was known as the “Skunk Works,” both because of its location near a malodorous plastics factory and because it had been founded during World War II as a secret installation, much like a moonshine still of similar name operated by a character in the popular Li’l Abner comic strip. In his 1994 autobiography, Skunk Works: A Personal Memoir of My Years at Lockheed, Rich recounted that the technology for his crowning achievement, the F-117, virtually “fell into my lap” after a Soviet scientist openly published (1975) an idea that led to the technology for the stealth fighter-bomber.

Rich, who retired in 1991 as head of the ADP, was a recipient in 1994 of the Distinguished Service Medal, the highest U.S. military honour for a civilian. In his memory, the Ben Rich Lockheed Martin Chair of Advanced Aerospace Technologies was established at UCLA’s school of engineering.