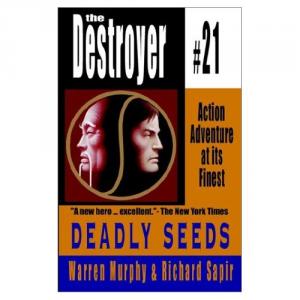 James Orayo Fielding is a multimillionaire. He hates people. Considers them little more than bugs . . . to be controlled or eradicated. Fielding also has a new way to solve the famine that is escalating in many overpopulated countries. It is a secret grain treatment that matures seeds in just one month. News of this spectacular process sweeps across the world. Starving nations of India, Asia, Africa, and South America literally ransom their treasures to be given the formula for this key to survival. Ecologists and world leaders are proclaiming Fielding as a hero to mankind. All this adulation merely bugs the wily old man. He'll do as he pleases, when he damn well chooses to do so, and harvest all the profits himself. Foreign agents attempt to steal the formula. Even the Mafia attempts to get into the picture. Naturally, CURE is also involved. Is it really possible to feed the world at discount prices? Why would a millionaire delay the chance to make billions of dollars? Remo and Chiun discover a triple-cross so sinister that even they are impressed, and decide that the world is worth saving after all. For a bowl of rice with a side order of raw bean sprouts to go.