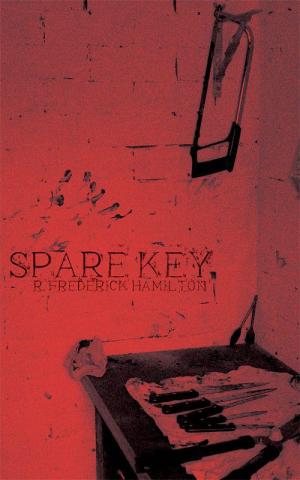 ...This was the way it always started. First he would see them and the air would thicken. Then the image of them bound. Then came the screaming and the Red Room would appear with the glittering, new meathook waiting just for them. And there in the Red Room he could play for as long as he wanted...
This volume also contains the short ­stories 'The Filmmakers' & 'Writer's Block'.

Review
Graphic and gruesome, Hamilton's novel explores voyeurism, sexual predators, child abuse, murder, torture - things I wasn't expecting in a horror novel from Australia. It's not that they don't have horror novels Down Under. It's just that this one is so lean and mean. Spare Key is actually only 170 pages - there are two short stories, The Filmmakers and Writer's Block included (nasty little stories they are as well). But Spare Key is the eye-opener. Think if Edward Lee had a child who grew up Down Under and you might get the general idea of just how horrifying this book is - sexually explicit and violent with an ending I really didn't see coming. --Fatally Yours, September 16th, 2009

But don't be fooled. Hamilton sets out to shock and disgust, making this material limited to a tailored horror audience. The violent sexual nature of many events throughout these stories may see readers placing Spare Key in the "too nasty" basket. So what realm of disgusting and shocking are we talking here? Probably somewhere between Stephen King's darker moments and Bret Easton Ellis's least shocking, and I'm not surprised to find these two authors on Hamilton's list of influences. --[As if!], July 1st, 2009

R. Frederick Hamilton is a young writer going at it hard and heavy in a competitive market. There's a lot of promise in this, his first book. Mark the name down, Hamilton is going to be a voice to be reckoned with in the coming years. --Scary Minds, January 15th, 2010