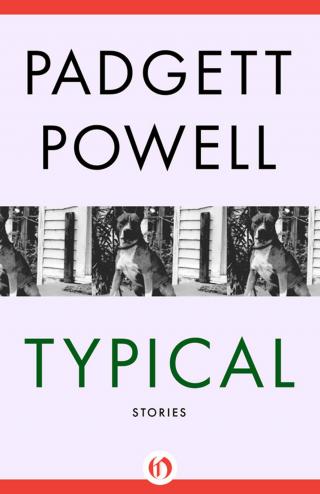 Twenty-three surreal fictions-stories, character assassinations, and mini-travelogues-from one of the most heralded writers of the American South There are many things that repulse "Dr. Ordinary." "Kansas" is notable for its distinct lack of farmland. "Wayne's Fate" is most unfortunate, not merely for Wayne but for the roofer pal who stands by watching his good buddy lose his head. "Miss Resignation" simply cannot win at Bingo. And there is nothing "Typical" about the unemployed steelworker and self-described "piece of crud" who strides through this collection's title story. Welcome to the world of Padgett Powell, one of the most original American literary voices in recent memory. Typical is both a bravura demonstration of Powell's passion for words, and an offbeat, perceptive view of contemporary life-an enthralling work by a one-of-a-kind wordsmith, and a redefinition of what short fiction can be. "A sparkling collection." — Time "Powell takes short stories to places where I've rarely seen them go." — Chicago Tribune "Powerful. . Powell has an almost unequaled ability to bring Southern colloquial speech to the page." — The New York Times "Lyrically intense and full of the surreal juxtapositions you find in the flotsam of floodwaters: stories at once edgy and exuberant." — Kirkus Reviews Padgett Powell is the author of six novels, includingThe Interrogative Mood and You & Me. His novel Edisto was a finalist for the National Book Award. His writing has appeared in the New Yorker, Harper's Magazine, Little Star, and the Paris Review, and he is the recipient of the Rome Fellowship in Literature from the American Academy of Arts and Letters, as well as the Whiting Writers' Award. He lives in Gainesville, Florida, where he teaches writing at MFA@FLA, the writing program of the University of Florida.