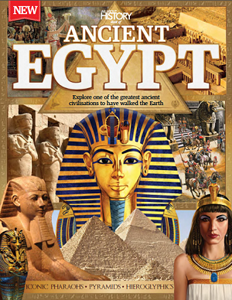 In 1922 a magnii cent discovery captured the imagination of the world. As Howard Carter slowly unveiled the opulence of Tutankhamun’s newly located tomb, people from every corner of the globe were enthralled. Egyptomania gripped the world. The rituals and beliefs of a highly advanced society were once again exposed; this was the most influential breakthrough in Egyptology since the Rosetta Stone had been discovered by Napoleon’s men and later deciphered by 19th century scholars. In All About History’s Book of Ancient Egypt we will step back in time and walk the banks of the River Nile to learn what made this society one of the most
powerful ancient civilisations in history. Meet some of the most iconic and infamous pharaohs, tour the awe-inspiring landmarks raised in their honour and identify the religious tenets that guided everyday life. You will also explore the grisly burial rituals that ensured safe passage to the afterlife and even learn to read the mysterious markings that adorn surviving monuments and papyri – all through amazing articles, illustrations and photography. It’s time to walk like an Egyptian!

All About Ancient Greeks