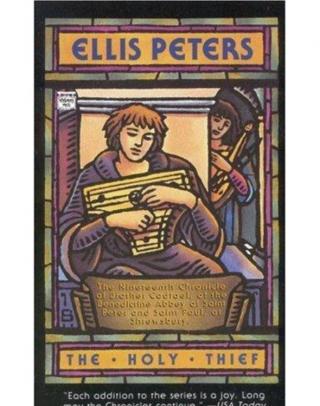 At the height of the hot summer of 1144, a lucky hit by one of King Stephen's archers rids the Fen country of Geoffrey de Mandeville, Earl of Essex, who has amassed his castles and gold by robbing rich and poor alike. Thus, the Benedictine abbey at Ramsey, long used as a den for Geoffrey's raggle-taggle marauders, is returned in a thoroughly ruined state to the good brothers of that order. The news comes to Brother Cadfael or the Abbey of St. Peter and St. Paul in Shrewsbury in the person of the dour, raw-boned Brother Herluin who is soliciting funds and aid to restore Ramsey Abbey to its former splendor. Of much more interest to Cadfael is Herluin's companion, Brother Tutilo, a slightly built lad with a guileless face surrounded by a profusion of brown curls. But Brother Cadfael, long a shrewd judge of character, notes on that brow an intelligence that bespeaks more of mischief than innocence, and he muses that this Brother Tutilo bears watching. The arrival of a French troubadour, his servant, and a girl with the voice of an angel gives Cadfael a feeling in his wise bones that something is about to happen. It does. The late autumn rains bring flood waters right to the altar where the abbey's most precious possession reposes - the bones of Saint Winifred. Only Brother Cadfael knows that moving the holy relic can expose a long hidden secret. He never envisions that the results of disinterment will be the theft of the cherished bones...and murder. Suspicion quickly falls on a guilty-looking Brother Tutilo. But did he do it?

The Leper of Saint Giles

A Morbid Taste For Bones

A haunt of murder

The Fires of the Gods