The Weird of the White Wolf 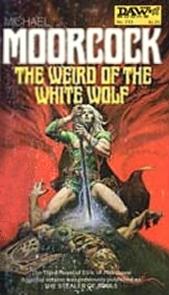 The third book in the Elric series introduces the reader to Moonglum, Elric's longtime companion. Much of the second novel moved away from the events of the first, and concentrated Elric's character on other adventures. The Weird of the White Wolf brings Elric back to Melniboné along with Moonglum, their friend Smiorgan Baldhead, and an army of raiders bent on overthrowing Yyrkoon, who stole the throne when Elric left Melnibonл for a year to travel the world. For those wondering, whether you've read the book or not: the “weird” of the title is an archaic definition of the term, given by Merriam Webster as “One's assigned lot or fortune, especially when evil.” And when he finds it, he's not all that happy about it. But that's to be expected when one's antihero has a crisis of conscience.
Certainly not a slow book by any means, nor a weak one in the context of the series. And it's definitely a necessity as a prelude to what comes after it.

Город в осенних звёздах / The City in the Autumn Stars

Комментарии к книге "The Weird of the White Wolf"