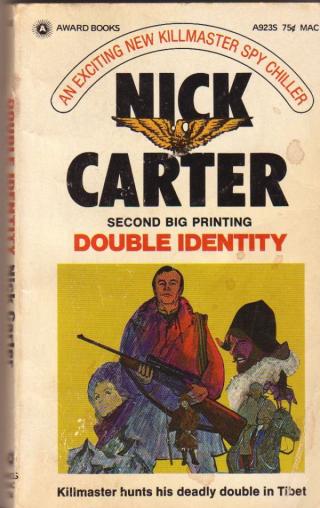 The message over the CIA hot-line sent AXE into an uproar. CIA’s top man in Tibet had been killed. His dying words had identified his assassin— “Nick Carter!”
AXE made their own Nick Carter’s briefing short:
1. A fake Killmaster at large in the East meant something explosive in the works, while the obvious lure to trap the super-agent was intriguing but probably of secondary importance.
2. Highest authority wanted the matter investigated and settled, fast!
Within hours, N3 had jumped into Tibet to pick up the trail of his mysterious double. In India the path ran through streets thronged with those seeking the fortune offered in reward for Nick Carter’s arrest. It led to the remote Pakistani border region where Nick found the fuse which, once ignited in India, would set off a holocaust that would destroy all the nations of the East.

The Weapon of Night

Blood Of The Falcon