Over Fields of Fire: Flying the Sturmovik in Action on the Eastern Front 1942-45 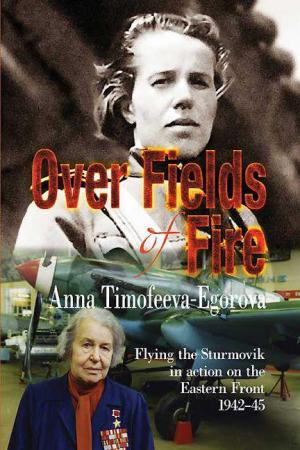 During the 1930s the Soviet Union launched a major effort to create a modern Air Force. That process required training tens of thousands of pilots. Among those pilots were larger numbers of young women, training shoulder to shoulder with their male counterparts. A common training program of the day involved studying in “flying clubs” during leisure hours, first using gliders and then training planes. Following this, the best graduates could enter military schools to become professional combat pilots or flight navigators. The author of this book passed through all of those stages and had become an experienced training pilot when the USSR entered the war.
Volunteering for frontline duty, the author flew 130 combat missions piloting the U2 biplane in a liaison squadron. In the initial period of the war, the German Luftwaffe dominated the sky. Daily combat sorties demanded bravery and skill from the pilots of the liaison squadron operating obsolete, unarmed planes. Over the course of a year the author was shot down by German fighters three times but kept flying nevertheless.
In late 1942 Anna Egorova became the first female pilot to fly the famous Sturmovik (ground attack) plane that played a major role in the ground battles of the Eastern Front. Earning the respect of her fellow male pilots, the author became not just a mature combat pilot, but a commanding officer. Over the course of two years the author advanced from ordinary pilot to the executive officer of the Squadron, and then was appointed Regimental navigator, in the process flying approximately 270 combat missions over the southern sector of the Eastern Front initially (Taman, the Crimea) before switching to the 1st Belorussian Front, and seeing action over White Russia and Poland.
Flying on a mission over Poland in 1944 the author was shot down over a target by German flak. Severely burned, she was taken prisoner. After surviving in a German POW camp for 5 months, she was liberated by Soviet troops. After experiencing numerous humiliations as an “ex-POW” in 1965 the author finally received a top military award, a long-delayed “Golden Star” with the honorary title of “Hero of the Soviet Union”. This is a quite unique story of courage, determination and bravery in the face of tremendous personal adversity. The many obstacles Anna had to cross before she could fly first the Po-2, then the Sturmovik, are recounted in detail, including her tough work helping to build the Moscow Metro before the outbreak of war. Above all, Over Fields of Fire is a very human story—sometimes sad, sometimes angry, filled with hope, at other times with near-despair, abundant in comradeship and professionalism—and never less than a large dose of determination!
* * *
The first volume in the new Helion Library of the Great War, a series designed to bring into print rare books long out-of-print, as well as producing translations of important and overlooked material that will contribute to our knowledge of this conflict.
REVIEWS

“…a very insightful slice of Russian thinking…. this woman’s treatment still manages to shine through brightly with her courage and honesty.”
Windscreen Winter 2011

Комментарии к книге "Over Fields of Fire: Flying the Sturmovik in Action on the Eastern Front 1942-45"