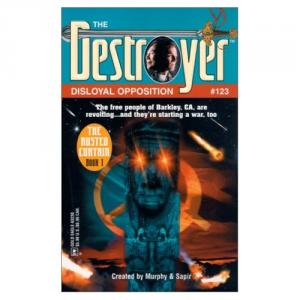 PEACE, LOVE AND DESTRUCTION.
JUST ANOTHER DAY IN SUNNY CALIFORNIA
Barkley, California, has always been a counterculture kind of a place, but now, its local historical society has decided they've had enough of Washington's politically incorrect ways.  They are seceding from the union...and they've hire an ex-KGB general with a supersecret particle beam weapon to blow up anything that moves so they can live in harmony and nonviolence.
The news of some weird - the term being relative - scene happening in Barkley gives Dr. Smith an excuse to dispatch Remo and Chiun, who have been hanging around CURE headquarters far too long.  Ironically, from across the former Iron Curtain, another secret specter is hunting the Russian mad dog as well - someone Remo believes to be dead. The first great war of the 21st century promises to be a wild scene for all, including Smith, who just received a special gift from an ex-president: an assistant director for CURE.