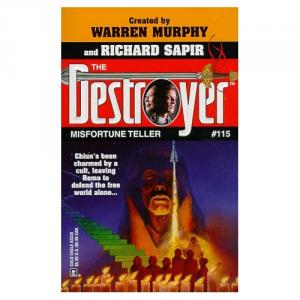 Eastern Propaganda
When Chiun an infomercial produced by Man Hyung Sun and his cult of Loonies,   he revels in the leader's sales pitch about the Sun Source and upcoming conversion of all humanity into Koreans. After all, what could be more divine. Chiun knows he has found a true holy man.  Remo knows he has found a true nut.
When the CURE pair thwart assassins at a Loonie mass wedding, Chiun is elevated to hero and close personal friend of Sun - and Remo's just fed up.  Especially as CURE ships him to North Korea, where brainwashed American Loonies are dancing to their leader's tune in a gambit to all-out war.
But Korea isn't the only split faction at war. Chiun's had about enough of his pupil's disrespect for the Seer Sun, and the former happy couple is headed for the mother of all battles...