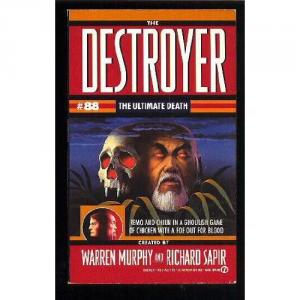 As people begin dropping dead after consuming Chicken King poultry, the Destroyer and his omnipotent Asian mentor begin to suspect that a vegetarian vigilante is on the loose.

Warning: Death is bad for your health
The great health-food movement in America was a victim of fowl play. Folks who had switched from prime beef to pure poultry were winding up dead meat. The country's Chicken King was squaking at the top of his lungs, the flesh-starved citizenry was yelling blur murder, and Remo and Chiun were the only one to know that a vegetarian vampire was on the loose. But even the indefatigable Destroyer and his omnipotent Oriental mentor did not know how to stop this friend feasting on cold vengeance and warm blood...