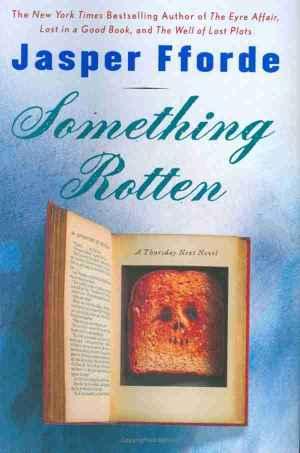 Something Rotten is the fourth installment of the Thursday Next series and she returns to her parallel universe of England in 1988 along with her son, Friday, and Hamlet, prince of Denmark. Both Friday and Hamlet need to be watched and cared for, so Thursday tries again to undo her husband's eradication by the Goliath Corp., which has now changed from a huge corporation to a huge religion. The fictional outlaw Yorrick Kaine decides he wants to be elected emperor and embarks on an anti-Danish tirade to win support. Meanwhile, moody Hamlet watches plays and movies about himself and the Swindon team has a shot at winning the Superhoop, the world championship of croquet. It's more fictional fancy and wild imagination from Jasper Fforde and Something Rotten has received positive reviews. The Denver Post says, "The latest installment in the Thursday Next series is impressive, and arguably Fforde's best work to date. It is a compliment to the author's skill and creativity that his humor remains fresh and his central character gains depth."