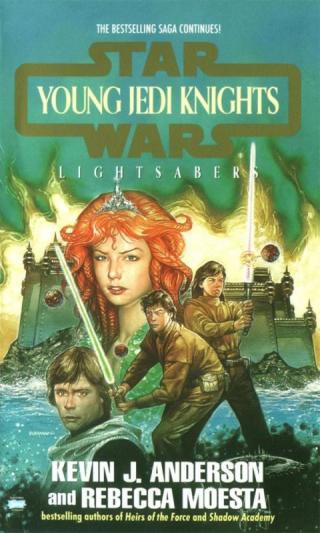 JACEN and JAINA
When the Empire died, they were born—a new hope for the New Republic. The young twins of Han Solo and Princess Leia are now fourteen, and enrolled at Luke Skywalker’s Jedi academy on Yavin 4. Together with friends both old and new, the future heroes of an already legendary saga begin their training.
Luke Skywalker has come to a grim conclusion. With the threat of a new generation of Dark Jedi being trained at the Shadow Academy, he knows the New Republic will need all the fighters it can muster. At last, it is time for the young Jedi Knights to build their lightsabers.
But there is more to mastering the ancient weapon than mere swordsmanship. Each student must learn about the mysterious bond between Jedi and lightsaber. For Jacen and Jaina, success will mean growing stronger in the Force. But for one of their friends, failure will mean tragedy…

Harry Potter and the Order of the Phoenix