Bravest Of The Brave, or, With Peterborough in Spain 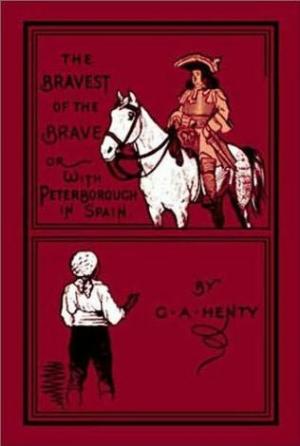 Henty again turned his attention to the war fought in Queen Anne’s reign. The little known but remarkable and eccentric Charles Mordaunt, earl of Peterborough, served the Crown as admiral and general, diplomat and ambassador. He led English forces in the War of the Spanish Succession and in a remarkable siege captured Barcelona and installed an Austrian archduke as king of Spain. Henty states in his preface that Peterborough “showed a genius for warfare which has never been surpassed, and performed feats of daring worthy of taking their place among those of the leaders of chivalry.”
Orphaned and ornery, Jack Stilwell begins life with two strikes against him. A frustrated uncle turns him over to an impressment gang and off he goes to Spain to join Peterborough. As an aide-de-camp to the general, he survives several adventures, faces down an angry mob bent on killing unarmed citizens, and helps the General in all the military actions in Spain. Jack also serves under Marlborough, exhibiting all the strength of character and valor expected of an English officer. This action-packed story ends with the former orphan a respected colonel and a member of Parliament.

With Kitchener in the Soudan : a story of Atbara and Omdurman

A Knight of the White Cross

In the Reign of Terror: The Adventures of a Westminster Boy

Bonnie Prince Charlie: A Tale of Fontenoy and Culloden

Through The Fray: A Tale Of The Luddite Riots

Комментарии к книге "Bravest Of The Brave, or, With Peterborough in Spain"