How to Walk a Puma: And Other Things I Learned While Stumbling Through South America 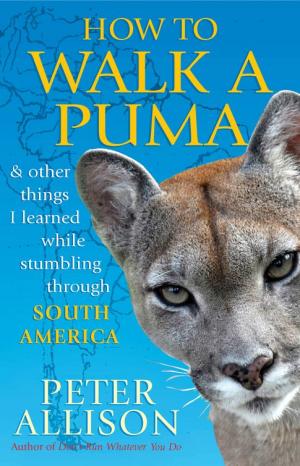 MORE THRILLING ADVENTURES WITH THE WORLD’S FAVOURITE SAFARI GUIDE
Plans are usually only good for one thing—laughing at in hindsight. So, armed with rudimentary Spanish, dangerous levels of curiosity and a record of poor judgement, I set off to tackle whatever South America could throw at me. Not content with regular encounters with dangerous animals on one continent, Peter Allison decided to get up close and personal with some seriously scary animals on another. Unlike in Africa, where all Peter’s experiences had been safari based, he planned to vary things up in South America, getting involved with conservation projects as well as seeking out “the wildest and rarest wildlife experiences on offer”. From learning to walk—or rather be bitten and dragged along at speed by—a puma in Bolivia, to searching for elusive jaguars in Brazil, finding love in Patagonia, and hunting naked with the remote Huaorani people in Ecuador, How to Walk a Puma is Peter’s fascinating and often hilarious account of his adventures and misadventures in South America.

Комментарии к книге "How to Walk a Puma: And Other Things I Learned While Stumbling Through South America"