Laika's Window: The Legacy of a Soviet Space Dog 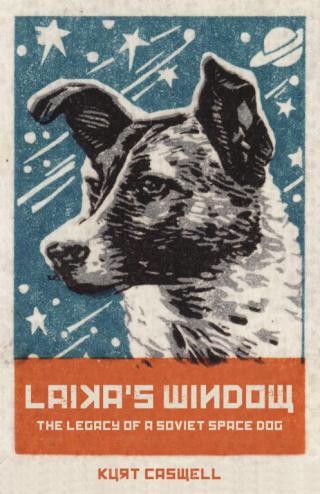 Laika began her life as a stray dog on the streets of Moscow and died in 1957 aboard the Soviet satellite Sputnik II. Initially the USSR reported that Laika, the first animal to orbit the earth, had survived in space for seven days, providing valuable data that would make future manned space flight possible. People believed that Laika died a painless death as her oxygen ran out. Only in recent decades has the real story become public: Laika died after only a few hours in orbit when her capsule overheated. Laika’s Window positions Laika as a long overdue hero for leading the way to human space exploration.
Kurt Caswell examines Laika’s life and death and the speculation surrounding both. Profiling the scientists behind Sputnik II, he studies the political climate driven by the Cold War and the Space Race that expedited the satellite’s development. Through this intimate portrait of Laika, we begin to understand what the dog experienced in the days and hours before the launch, what she likely experienced during her last moments, and what her flight means to history and to humanity. While a few of the other space dog flights rival Laika’s in endurance and technological advancements, Caswell argues that Laika’s flight serves as a tipping point in space exploration “beyond which the dream of exploring nearby and distant planets opened into a kind of fever from which humanity has never recovered.”
Examining the depth of human empathy—what we are willing to risk and sacrifice in the name of scientific achievement and our exploration of the cosmos, and how politics and marketing can influence it—Laika’s Window is also about our search to overcome loneliness and the role animals play in our drive to look far beyond the earth for answers.
Review

“Caswell positions Laika as an animal astronaut rather than a lab animal and showcases the bond between Laika and the Soviet space scientists, redefining the story of Laika and the space dogs, the pioneers of all our space endeavors.”
― Chris Dubbs, author of Animals in Space: From Research Rockets to the Space Shuttle

“Brilliant, original, and heartbreaking, Laika’s Window takes us on a journey into the fascinating history of animals and humans in space travel and, beyond that, into the nature of our own loneliness as creatures, both here on earth and out in the vastness of the cosmos. Caswell’s tender consideration of Laika and her life is infectious, and I found myself just as invested in this little being that had been shot into space so many years ago. I won’t forget this powerful book, which brings us one step closer to making sense of our place in the universe.”
― Taylor Larsen, author of Stranger, Father, Beloved

“Laika’s Window is a magnificent account of one of the world’s most famously tragic dogs. Combining meticulous scholarship of the Cold War era, profound sociopolitical analysis, unerring literary skill, and―the book’s great surprise―some of the most heartrending, haunting reflections ever written on the relations between canines and humans, Kurt Caswell’s masterwork shot an arrow through my dog-loving heart yet left me nothing but grateful for the experience. This is a mesmerizing tale by a writer as sensitive and heartful as he is brilliant.”
― David James Duncan, author of The Brothers K and The River Why

About the Author
Kurt Caswell is a writer and professor of creative writing and literature in the Honors College at Texas Tech University, where he teaches intensive field courses on writing and leadership. He is also on the faculty at the Vermont College of Fine Arts. His books include Getting to Grey Owl: Journeys on Four Continents, In the Sun’s House: My Year Teaching on the Navajo Reservation, An Inside Passage, which won the 2008 River Teeth Literary Nonfiction Book Prize, and an anthology of nature writing, To Everything on Earth: New Writing on Fate, Community, and Nature, which he coedited with Susan Leigh Tomlinson and Diane Heuter Warner. His essays have appeared in ISLE, Isotope, Matter, Ninth Letter, Orion, River Teeth, and the American Literary Review. He lives in Lubbock, Texas.