Patrick Moore's Guide to the Moon 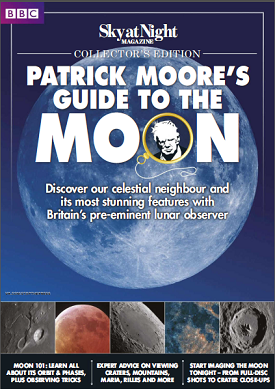 I can’t remember the first time I looked at the Moon, nor when I realised that it was a hunk of rock rather than a ball of cheese. As far back as I can recall it has always been there, a fact as plain as the sky is blue, a constant companion as Earth falls through its orbit around the Sun.
I suspect I’m not alone, nor that I’m the only one to have taken for granted what a marvellous world it really is – not just a silvery orb, but a place of intricate landscapes riddled with countless craters, lofty peaks and scything valleys. A world that never turns away from Earth, but looks different every single day. Yet in astronomy we have a habit of regarding our neighbour as something of a nuisance, its bright glare a barrier to the dimmer delights beyond. In this volume we will, I hope, show you why the Moon has enraptured the human race over the centuries.
Patrick Moore’s Guide to the Moon is designed to help you explore our near neighbour. Within, you’ll find the best of Sir Patrick Moore’s Moonwatch lunar observing columns, published in BBC Sky at Night Magazine between 2008 and 2012, plus a few from the Sky at Night TV show’s Pete Lawrence. We’ve arranged these by quadrant, then by decreasing latitude for ease of reference. Plus we’ll give you a guide to the basics of lunar observing, tell you how you can go deeper to explore its hidden valleys and inconspicuous dome fields, and even induct you into the realm of lunar imaging.
What makes the Moon special is that anyone can see it, whether you live under dark skies or in the centre of London, whether you have a telescope or rely on your eyes alone. All you need to do is look up.

The Universe According to Patrick Moore

The Future of Humanity: Terraforming Mars, Interstellar Travel, Immortality, and Our Destiny Beyond Earth